We have little concern about Marshall County’s and Iowa’s recent elections and appreciate the hard work by all involved with running the polls and accurately counting the vote. Voting systems from foreign manufacturers or vendors create a level of distrust. Mail in balloting has been a bi-partisan concern over several elections, and again create a level of distrust. Ballot collection and harvesting allows too many unknowns into the voting system. Voter identification is a valuable resource of confidence in knowing that voters are indeed eligible and can legally vote. As is commonly said, sunlight disinfects much. Our election processes need to be as transparent as possible.

Indeed, future election security is a large and growing concern that we wish to prepare our state to eliminate questions of confidence that could occur if we are not vigilant. We should not wait until we might experience problems before we address them.

“We call on the Iowa State House, State Senate, Secretary of State, and Governor to do what is necessary to eliminate any possibility of bringing any election’s integrity and legitimacy into question and solidify our elections in each and every precinct in the State of Iowa.”

We have observed the rapid rise in large contributions to candidates and in turn the spending by candidates of all parties for nearly all levels of offices from local, statewide to national. It has been increasingly apparent that some coordinated and large donors and organizations come from out of state, and even out of country. These are contributing very large amounts of money to our candidates. Some of those contributions came from people and organizations who do not live, work, or operate any kind of business in our state. This has the potential of circumventing the power of the individual voter and may even cause undue influence over candidates.

“We call on the Iowa State House, State Senate, Secretary of State, and Governor to find a way to limit out of state campaign contributions to not exceed 15% of total funds raised, and to bring about such campaign financing reforms immediately.”

We are daily witnessing our public education system being influenced by nefarious ideological entities who care nothing for the belief, ideals, and principles of the Republic of the United States. We are seeing many of these entities use the Federal government to coerce, force, and subject states and localities into adopting programs and policies that have no benefit to the learning of any student.

Our students have consistently regressed in learning about civics, understanding of our economy, learning real unadulterated history, and written communications, and we observe declining scores

Programs such as Common Core, No Child Left Behind have failed our children’s learning. Concepts such as critical race theory, and the 1619 Project are not truthful in relating our history, exert unchecked influence in our children’s education and implant untrue beliefs into our children.

“We call on the Iowa State House, State Senate, and Governor to eliminate such federal influence as possible in our education system, support the ban on the 1619 Project in Iowa education, and bring about a renaissance of the education system in Iowa’s schools for our children today and future generations.”

If you care about these or other conservative issues, 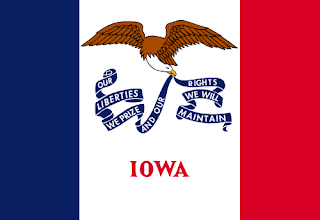